I recently stumbled across this Grey2K piece about 80,000 reasons to end dog racing now.  The premise is that 80,000 dogs have raced since 2008.  Since they raced they must have been born into cruelty.  Since they were born into cruelty racing should end.
http://grey2kusa.org/eNEWS/G2K-21115.html

It also puts forth that Greyhounds are Killed and that Racing Kennels Neglect Dogs. It then goes on to explain that nearly 1000 dogs have died and how greyhounds are confined for long periods

My two dogs are of that 80,000 and in them I have seen nothing that suggests that racing should end because of what they have gone through and what they have become. 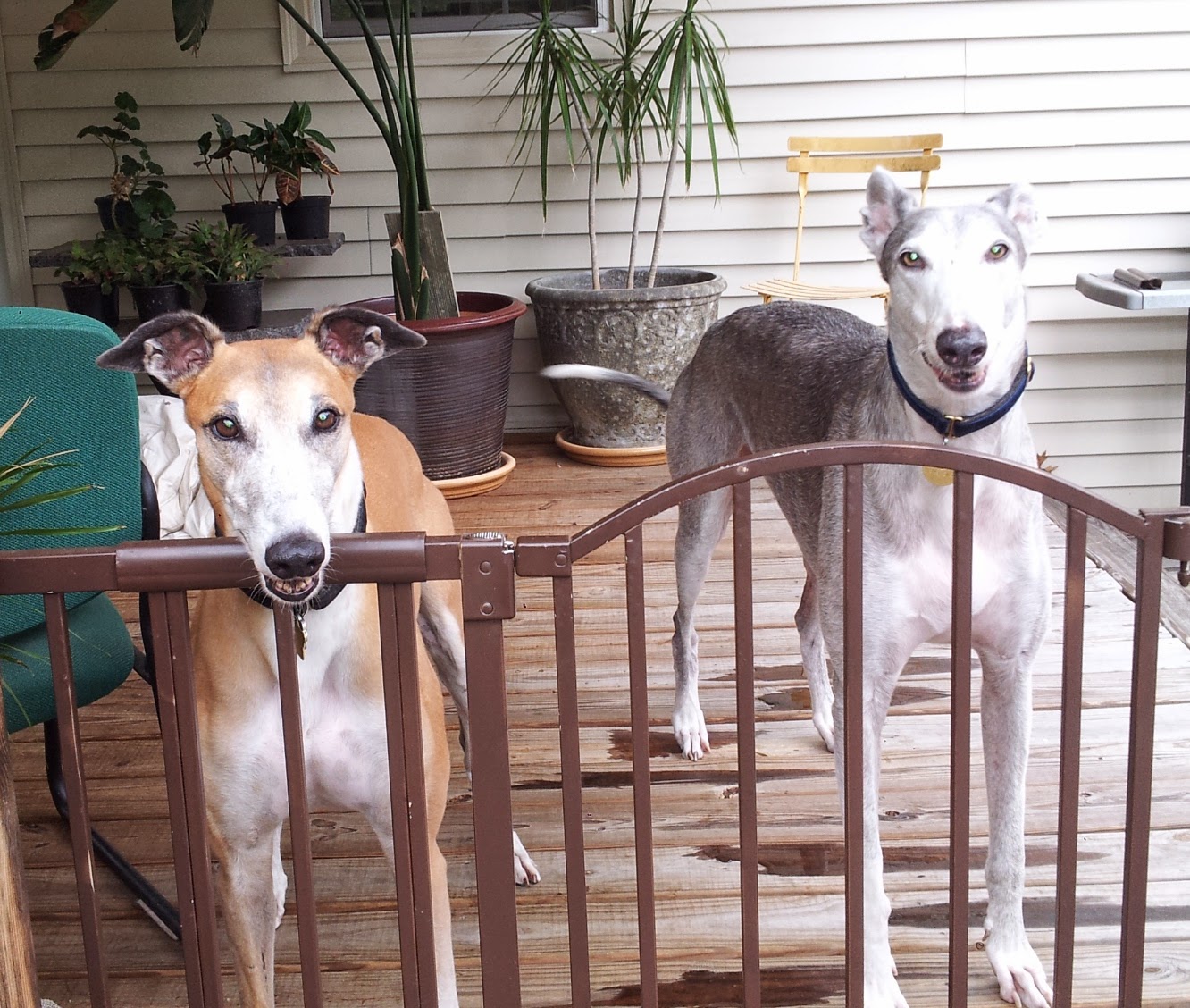 I also happened to come across this ted talk by Tyler Cowen called “Be Suspicious of Simple Stories”. http://www.ted.com/talks/tyler_cowen_be_suspicious_of_stories
He talks about stories and narratives and how if a story is too simple, to close to a standard narrative like good vs evil, then we should be suspicious of it. Life is much more messy than a good hero story allows for.  He indicates if you find yourself buying into a good simple story you are probably lowering your I/Q by 10 points.

Now I could construct an equally simple narrative called 52000 reasons.  Many  adoption groups use greyhound-data.com to track their adopted dogs.  Of the groups that bother to track adoption on that site, it shows that over 52000 greyhound adoptions have occurred in the USA.  Think of all the happy families whose lives these dogs touched.  Think of all those wonderful dogs that would never have gotten to live out their lives as pets if anti racing organizations had gotten their way and the dogs hadn’t been given the structure, training, confidence and maturity that the racing environment provides.
Of course this narrative is equally simple. It assumes that all dogs are easy and wonderful, all track environments are perfect and all adoptive homes are awesome.

So by all means do research, have opinions, develop your reasoning for them and don’t buy into either of the simple narratives.   It is all so much more messy than that.

Today Ricky, Kassa and I headed to the field for a New Years romp.  The field is looking a little shaggy in places but I think it is actually kind of picturesque. As the boys played I did some reflecting on the past year.  I'm just going to mix in some of my random thoughts with some pics of the boys at play.  Feel free to ignore the boring words and skim the pics. 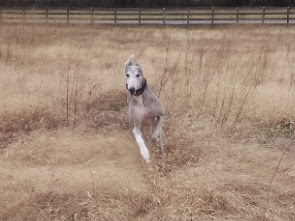 For me athletically, 2013 was a complete bust with many lbs gained, but many good things happened in other areas.  As in most things you sacrifice in one area to give focus to another.  The area that had my focus this year was participating more actively in the local greyhound adoption chapter (Greyhound Pets of America / Nashville). 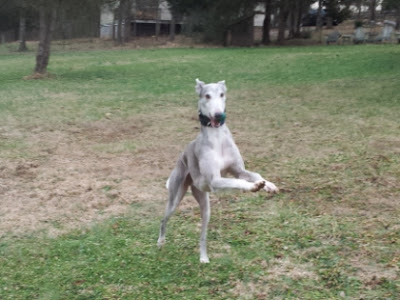 This has been a real eye opener for me in terms of the amount of effort involved in running a greyhound adoption program and the enormous dedication of the people involved. 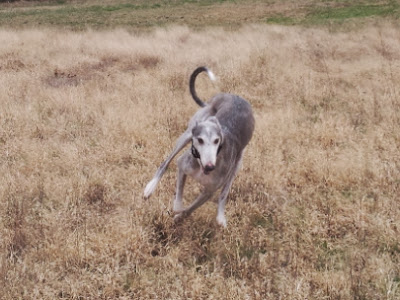 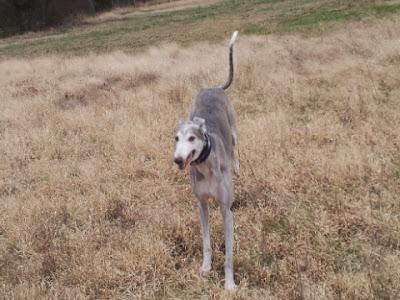 This year I tried to be exposed to most of these areas in one way or another as well as develop a computer program and database that helps manage the whole process.  The program though is just a coordination tool.  It is the people that make the organization function. 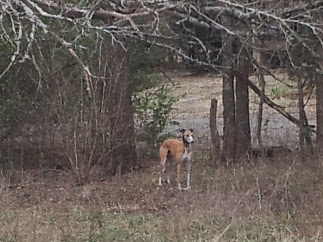 Things are not always smooth sailing of course.  Even though everyone involved wants to work for the benefit of greyhounds,  there of course are disagreements on the best methods to use and what the priorities should be.  That said I think there has been a real rejuvenation this year with a new sparked dedication to the program.  I am extremely happy with the progress we made. 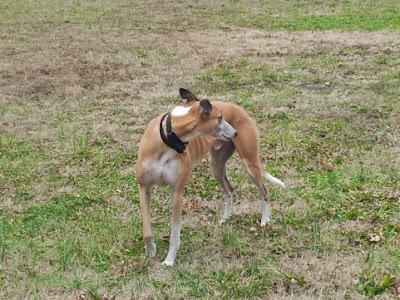 One of the big issues in the greyhound adoption universe is transporting dogs away from the tracks and out into the distant states and communities that can absorb them into petdom.  The Birmingham adoption kennel has had a program in place to transport retired dogs out of Birmingham and to adoption groups as far away as Canada, for placement into good homes.  A problem has arisen however, in that the adoption hauler used has run its last run.  I am very happy to say however that GPA/Nashville and many other groups are assisting in their efforts to get a new hauler in place so that they can continue this critical service.  GPA/Nashville is matching funds raised for this effort up to the lessor of $15000 or half the purchase price of the vehicle.  This offer is expiring on February 1st.  If you feel, as I do, that this is an extremely worthwhile effort please visit their fundraising web page.
Posted by jcp at Sunday, January 05, 2014 2 comments:

I have been away from this blog for a very long time, but with somewhat of a good reason.  It is not because I have dropped everything, decided to train in Judo full time and go for Olympic gold.  No.. instead I have opted for decreasing physical activity, increasing belly size and becoming much more involved with the local greyhound adoption group.

It has been any eye opening experience and a rush of ups and downs.  It has also been an honor to work with such a dedicated community of people dedicated to greyhound adoption.

For those who don't know, my background and profession are in computer software development.  As such I have tried to lend those skills to the greyhound adoption program.

My latest endeavor has been to write an auction software program and integrate it into our website in order to raise money for greyhound adoption. Now, with an enormous effort by many people assembling, photographing and cataloging items, we are ready to run our first auction.  You can register now and it opens on Friday, November 8th. 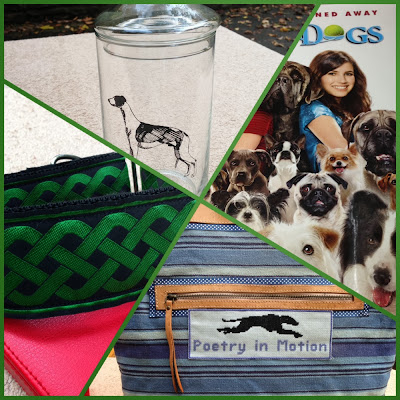 Please go and have a look at the items and sign up for the auction.  There are a lot of great items and it is for a great cause.
Posted by jcp at Thursday, November 07, 2013 2 comments:

How to make road kill, by Kassa 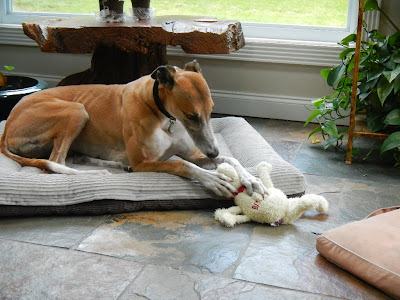 First get a brand new stuffy toy complete with squeaker. 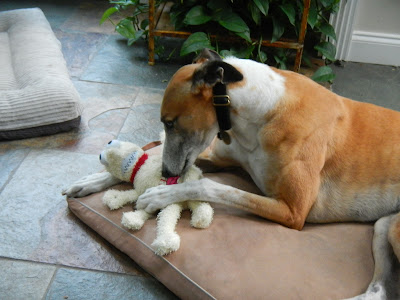 Identify the precise location of the squeaker 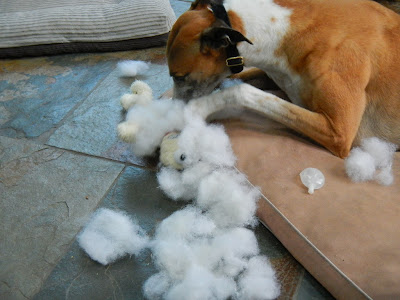 Carefully rip into the toy and extract the squeaker.  Surgically  remove any stuffing that you can grip. 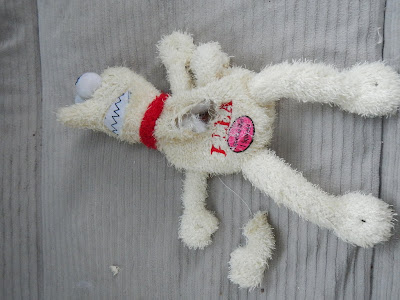 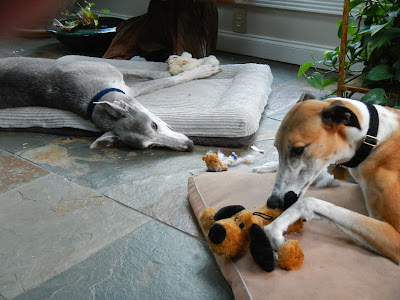 Get a hold of your brothers new toy.....

I was in a somewhat analytic mood today and so I felt like having a look at some greyhound data assembled by Grey2k.   I find that Grey2K gathers quite a lot of data but seems to cherry pick the results without really looking it it as a whole.  Their purpose is to end greyhound racing and so they look at all the information that they get through that lens.  I want to look at things from the point of view of not expecting perfection but rather to determine if there is there indeed is a systemic problem in the industry. Grey2K's bias is that wrong doing, or failure is due to a system that is corrupt to the root and must be ended.  My bias is that racing is a system filled with checks and balances, but that is ultimately comprised of humans that have similar human failings to those found in any industry.

I found that Grey2K had requested the disciplinary records from the different tracks in the different states.  They assembled the data together into a searchable database.  I found it easy to look up individual records but could not get any summary (aggregate) data so I wrote a simple program to get the data and put it in my own database for analysis.  I decided to analyse 2 different tracks.  The ones I chose are the once my boys are from being Birmingham Alabama and Southland in West Memphis Arkansas. 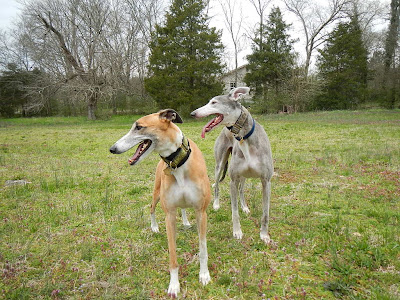 Birmingham is a track that currently houses 423 active racers at 9 different kennels.  Estimating from track info they run anywhere from 5000 to 6000 races per year or 400 to 500 per month.  From 2002 to 2012 only 162 disciplinary actions in fines have been taken amassing $8920 in fines.  The majority of the actions taken from 2008 to 2012.  Grey2K manually classified all the actions into one of the following categories:  Abuse, Conduct, Death, Drugs, Injury, License, Miscellaneous, Neglect, Racing Rules, Vaccinations, and Weight/Weigh-Ins.

There have only been 2 disciplinary actions taken that Grey2K classified as abuse. Both were from the same kennel in 2007 where the offender was found keeping more than one greyhound in a single crate. A total fine of $175 was issued.

Conduct breaches have nothing specifically to do with the safety of greyhounds per say, but rather are disciplinary actions taken against individuals for their actions on or off the job. Grey2K classifies conduct as follows. "However, the category of “conduct” is used for a human that tested positive for drugs (or engaged in other negative behaviors)."  At Birmingham their were 22 conduct violations with one of the following reasons.  Only one had any relationship to humans testing positive for illegal drugs:

There were 13 disciplinary actions taken for the reason Grey2K classifies as drugs.  I found the Arkansas racing rules online and while they are not Alabama's, based on the fines that were issued I think they line up with the way Alabama classifies the violations.

Like Wrestlers, greyhounds have target weights that the trainer decides they will compete at. If at weigh in time they fail to meet the weight, the trainer is fined.  A greyhound being underweight or overweight in this classification does not mean the greyhound is gaunt or obese.  It is simply a record of greyhounds that failed to meet the target weight. Of the 162 disciplinary actions 90 of them are for the reason of weight/weigh ins.

There was one fine imposed because a vaccination was found not to be current.

There were 2 cases of penalties under the category of License.  One was a failure to obtain a permit/license and the second just specified that the license was suspended with no reason given.

Examples of the 8 Misc violations are: Unauthorized to sign in visitors into a kennel, Failure to comply with a judges order, Failure to appear, Failure to pay fine on time, Violating Kennel Overflow Policy
failure to disclose criminal history and racing history on license application.

I will be briefer with Arkansa data:
Southland Park has one of the largest kennel compounds in the nation.  It's twenty-five buildings can hold up to 1,950 greyhounds at  any given time. It conducts an average of 6,000 races over the course of a year.

Grey2K had data from Arkansa from 2010 to 2013 resulting in 63 disciplinary actions.

Looking at this data, I think that the racing industry is designed to carefully monitor how racing is conducted. It takes especially seriously anything that could effect the outcome of a race, especially performance enhancing drugs.  It also demonstrates the importance of how individuals conduct themselves.  A disciplinary system that issued no violations would be an indication that it is completely ineffective.  This report shows how the system responded to situations from the relatively minor violations to the serious ones and is an indication of what kind of environment it is trying to foster. Given the number of dogs, races and kennels the number of disciplinary actions does not seem condemning.
Posted by jcp at Tuesday, May 07, 2013 5 comments: